Lesvos, was originally joined to the coast of Asia Minor, but was detached by powerful geological disturbances, which gave it its current intriguing shape, likened by the poet Elytis to the leaf of a plane tree (of which, incidentally, several mature specimens up to 500 years old or more, adorn some of the village squares, in Agra, Plomari and Messotopos, for example).

It is 70 kms long by 45 kms wide, with an area of 1630 sq. kms. It has 2 large bays, Kalloni’s and Gera’s, both with narrow entrances. Though there are no permanent large rivers with a steady flow of water, there are abundant springs, and water-courses in winter and spring at least.

Moreover, some of the river mouths and pools are semi-tidal and never dry out, even in autumn. Indeed, strong winds in the right direction at this time of year can whip up the sea and send it some way up the river mouths. Such areas include Kalloni East and West Rivers, Skala Eressos River, and the inter-tidal rivers and pools at the area known as “Derbyshire”.

Moreover, the island’s 2 sets of salt pans, certainly those at Skala Polichnitos, usually remain wet. Although the main Kalloni Salt Pans have been known to dry up, there is always some water in the surrounding channels.
The main marshes and flatlands, then, occur around Kalloni, Skala Eressos and Sigri; and the hilliest areas are in the west around Eressos, to the north around Mithymna (Molivos), and to the east around Agiassos; and the nearby Mt. Olympus, peaking at 3500 ft, is the highest point on the island after Mount Lepetimnos, actually one meter higher! These uplands are usually cloaked mainly in pines and holme oak, with olives on the lower reaches, and, around Agiassos, some stands of deciduous woodland, including sweet chestnut.

Around the coast, especially, there are large areas of low-lying scrub and grassland, often with a profusion of wild flowers in the spring. Further inland, the dried-up river beds ( for example just up from Skala Eressos ) offer similar “arid” scrub with its own special birds – like Rufus Bushchat.

The basic geography of Lesvos, together with its size and location so close to the Turkish coast, mark it out as an area of varied habitats, with some good wetlands, likely to prove extremely attractive to spring and autumn migrants; wet enough to keep a fair variety of wintering wildfowl, waders etc.; yet also playing host to a good mix of breeding birds – some of them, like Cinereous Bunting and Kruper’s Nuthatch, quite outstanding.

Before moving on, just a word or two of advice at this stage – to make access easier, and to minimize disturbance to the birds, a car is recommended. Birds generally feel far less threatened, and in consequence are far more approachable than if viewed on foot or by bicycle.

WHERE TO WATCH BIRDS IN LESVOS – A BIRDER’S SITE GUIDE:
(for more details on every sight, see The Birding Areas in Lesvos) 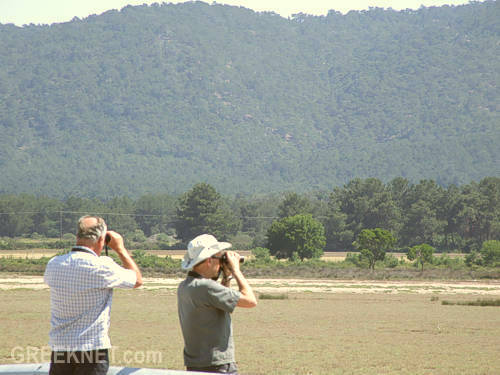 Kalloni east River
This section is probably the best area to view singing Olivaceous and Great Reed Warblers soon after they arrive from mid to late April; again before the vegetation becomes too rampant. Short-toed Larks, buntings and the odd Hoopoe are also likely along here; and this is usually the first site one encounters returning Black-headed Bunting in late April…Possible birds likely anywhere along the East River are almost too numerous to mention.

West of the island – Eressos and approaches

Return from Sigri to Eressos via Coast