From the ancient years until today, the human, trying to create drinks with alcohol, was using scented herbals, fruits, roots, flowers and seeds, at start with extract and fermentation, and later with distillation, with final purpose to feel enjoyment, relaxation and drunkenness. However some distilled products showed and in the Arabian world, the Byzantine culture of Constantinople (Istanbul), the Greek element of Alexandria and Smirni.

The depositions of famous coppersmiths from Armenia and the Pont, who made nice decorated distilling vessels, confirmed the deep knowledge of distillation in all the Byzantine empire.
Plus all that, the blessing ground of Minor Asia and Thrace, gave a perfect material, where dominated grapes and figs, the same time that the cultivation of anise in Lesvos and Limnos and the production of mastic in Chios, consisted the necessary elements for the production of raki.

Those professionals , called also rakitzides, because they were producing a drink, distilled product from grapes raki sharing with anise, scented herbals or mastic, which succeeded , after the period where drink was not allowed in Turkey, to conquer the well-off class of Ottoman empire, giving to the best rakitzides special privileges.
As it was expected, the quick spreading of that drink, challenged the provisional deficiency of alcohol , and soon the solution in that productive problem, gave the French and Russian clean alcohol.
However the ease which somebody could produce a drink of that kind, mixing that clean alcohol with water, created quality problems, because the final product wasn’t distilled product but simple mixed.
For that reason in Smirni and Constantinople ports, in every receipt of clean alcohol, they were adding a colored substance, fact that obliged the payee in obligatory distillation before the use.

So, with that way, created ouzo, which went about for many decayed in many Greek areas, with the old name raki. It’s name became from the alteration of customs term giouzo, which means for use and it’s believed that it becomes from the Italian expression OUZO MASSALIA which means for use in Massalia, where the first charges directed. That inscription escorted parcels

with raki which destined in areas out of the borders of Ottoman empire.
With the destroy of Minos Asia, rakitzides coming in Greece, where, mostly in Lesvos the distilling companies grew up rapidly. The emulation between refugees and local distillers, create a great development in production and consumption of ouzo.
In continuity, we are passing in the period of big production and tough contest. distilling vessels and distilling methods deserted, making everything very simple, lowering the quality of the product and the name of the distiller.

Today we’re living a reality which makes optimism. We came back in the old good time, where the distilling vessel and unlimited possibilities of our country, accompanied with knowledge, experience, profession and yearning, have called up. Famous names offering great enjoyment in consumers, not only in Greece, but in all over the world.
However, the tool of life, the distilling vessel , it was difficult to be constructed. In 1932 coppersmiths of the Virgin Mary of Chalkeon in Thessalonica, gave the solution in the problem. Copper is the only and necessary material in creation and distillation of ouzo, which helps the uniform warming of alcohol with anise, and it consists of defined factor, so the heat to be defused in all the inner surfaces. That’s the reason why the way that it’s building demanding patience and great means.

The classic traditional distilling vessel, is consisting of three parts. The main trunk (a vessel where we put clean alcohol, anise and other herbals for distillation), and the bow (a corridor where the steam will pass through), which drives in a cooling pot (an external pipe in the same diameter with the bow, which has cold water, and an interior pipe with the steam, which liquefied is transforming in distilling). 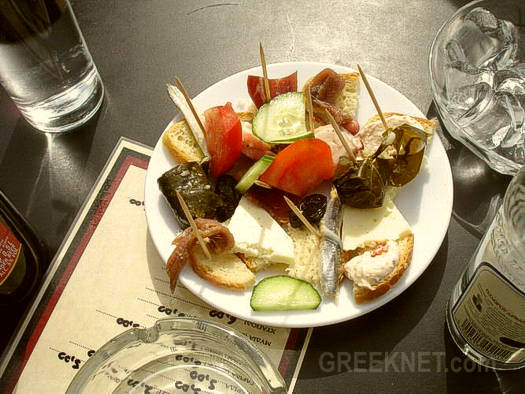 The facts about ouzo?

It’s the drink which is discerned from a pleasant aggressive that balances their scents, bringing revolution in senses and giving the sweet remembrance and glee of every peculiar time in life. Just four years ago, the admirable actions of some people, helped in fortifying ouzo, tsipouro, tsikoudia and the distillation of Corinthian currant, as exclusive Greek products.
During the turbulent life of our island, ouzo accompanies peasants and coastals in every moment of their life, giving them power, happiness, courage and hope for a better future. However ouzo, which is certified the drink of revolution and freedom , demands discipline at the time of drinking it, and attention in the way you drink it.

A good and balanced ouzo, may contents until 46% alcohol, to be able to travel all over the world, unaffected from the climate and to be strong against the affection of the time, keeping its aroma and the flavor.
We often observe, that when we add some ice or some water in ouzo its color becomes white like milk. This phenomenon is the result of binding anithole, one aromatic substance which anise have, and it’s considering as a sign of high quality.

Ouzo with anise, is drinking straight, or with ice, accompanied with nuts, but mostly accompanied with traditional snacks as appetizer. So the flavor of anise comes out, the composition of the drink getting bigger, and the taste is getting softer and all the senses are charming.
The product of this Greek drink, that it has identified with Greek soul, hospitality, the sea and the blue sky, is a difficult and interesting art. The technique of distillation has a lot of agonies and great expectations.

Actually, the procedure until a glass of ouzo comes at your lips, is long. However the satisfaction that you’ll feel after that, will efface the tiredness of the big try which strived until that moment, from our distillers, the artists of senses.